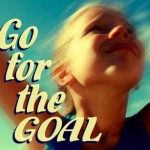 I was studying goal setting for children when I read a line saying that the lower brain makes us think about our goals all the time. Rather than just believe without any scrutiny I decided to try and learn more about that. I figured that a bunch of science would help me back up a saying like that should I ever use it.

I read a few articles and none of them read anything like that phrase, so I lost hope in finding a connection. Then I read something about Dopamine (go look it up if you don’t know what it is).

I’m paraphrasing it to bring the context with it: The pursuit of a goal is very much like having acquired the goal already (in terms of dopamine in the brain), and the failure to reach the goal is much like losing a thing that you already own. The reason is that the process of achieving releases dopamine while losing/failing shuts of the dopamine flow. As a result, the reduction of dopamine in the brain makes us feel anxious and generally in poor form.

An example given was that if you have a stalker you must ignore the stalker completely. The stalker’s goal is to get a reaction out of you – any reaction will suffice. So if they phone or text you, non-stop, then you answer after the 50th call/text, just to tell them off, you have given them that dopamine release and they will have learned to always call/text at least 50 times. Because that’s what you’ve just taught them. That’s how to reach their goal.

I read that and thought about parenting. Kids will do anything for attention. We have all heard that any attention is good attention. Now you have the science behind it.

This can also been see when you’re in a store with a child who suddenly can not live without something they’ve seen on the shelf. The sight of it is where it started and once the child has decided that they want it, and the anticipation of getting it creates excitement (dopamine release). Failure to actually get it shuts off that dopamine flow and the child crashes, and you end up dragging the kid out of the store, kicking and screaming all the way home.

There is a TV show called Beyond Scared Straight where a camera crew follows young offenders as they tour through jails and prisons in the USA. I have watched about 10 episodes so far and I have noticed a pattern in these kids. I intend on writing an entire article about just that show, but for the purposes of getting attention (this article) I will say this: All of these kids are getting attention from peers (crime and poor choices) at the start of the episode, and by the time they’ve been scared straight they choose to get attention from their parents (focus on a good life). The friends and the parents each offer the child a dopamine release from their attention, and each leads down a different path.