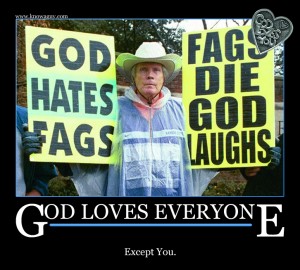 The other guest is a Ugandan Christian Priest. He said his sister wanted a divorce but that’s against his faith, so he advised her not to. She listened to him and while he was away in school her husband murdered her. It took the death of his sister for him to realize that his faith did not provide him with the answers to life’s questions. So if the bible says marriage is permanent and gay is wrong, but he cannot take his faith as it is written, then what can he do?

Gay isn’t a choice, and anyone who has spoken to a homosexual person will know this. You cannot become UNgay, and you cannot BECOME gay. It’s the Kinsey scale of sexual attraction. While you CAN compare humans to other mammals in physiology, you cannot compare other animals to humans in emotion and intellect. Our brains are where the gay component lies – and if science figures out a gay gene, no gay person will actually want to be cured, just like no hetero person would want to be turned gay.

These anti-gay people need to step back from this opinion-powered debate and spend their creative, determined energies on something more important, like education, healthcare, science, solar power, art or perhaps self-improvement.