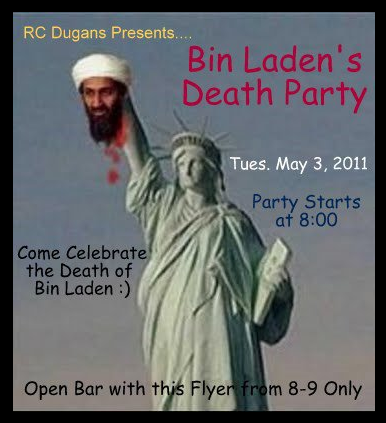 The mainstream media has exploded with news of Osama Bin Laden’s death. If the media reported his death and how it happened we could call that news. But that’s not what happened anywhere in the developed nations. Everyone is celebrating the joyous occasion of the slaying of a human being.

The USA is the most proud nation I can think of. So proud that many Americans are offended when another country does not accept the USA’s interpretation of good politics. The USA has a fantastic Constitution, whereby the land is ruled by law and not men. Fair and just at it’s very core. Each state is sovereign in the union and they’re free to make laws that do not infringe upon the rights of others, as per the Constitution.

WAIT! That’s not at ALL what we know the USA to be like. They invade other countries after the dictators they push into power fail to follow the status quo, for obviously bull**** reasons that don’t matter in the long run because they never leave – regardless of mission success or fail. The US imposes its military might all over the world – all in the name of liberation, freedom, or defence of their borders – but they do not adhere to the rules by which they want the other countries to operate and they mass-murder hundreds of thousands of non-combatants in the process.

Why is this relevant? The rule of law puts the law in front of the emotions, power or influence of any man or group of men. – Man, in this context simply means human. – The rule of law levels the playing field so that no matter where a person originates; no matter a person’s finance; no matter that person’s influence; that person is granted the same rights and freedoms as any other man.  What is the point of laws if a specific group of men are exempt from them? And if there are exemptions – who has the power, right or authority to make such exemptions? How did they get that power? If one man can have his human rights taken away, then so can yours be taken away. If it is OK to murder Osama for crimes he is assumed to have committed, because he was hard to find, then it is ok to murder anyone else, including you.

Without the rule of law we have anarchy. This is where humans are supposed to be separate from the animals. Our ability to create complex social structures, instead of survival of the fittest, which is what the US is doing. The US the fittest and they’re imposing their will while we watch, while the middle-east is bombed into the stone-age. Who do you think the military machine will turn against when the middle-east is crushed?

Osama is dead – officially. That’s the news. Celebrating the death of a man, and the justification for his murder by soldiers, on another nation’s land, without permission/clearance/knowledge, is disgusting. I am ashamed to be part of a society that celebrates such barbaric ideals right in the face of law, democracy and human rights.

“I mourn the loss of thousands of precious lives, but I will not rejoice in the death of one, not even an enemy. Returning hate for hate multiplies hate, adding deeper darkness to a night already devoid of stars. Darkness cannot drive out darkness: only light can do that. Hate cannot drive out hate: only love can do that.”

In case I have not made my point clear: Had Osama been killed in a fire-fight as the soldiers attempted to arrest him, that’s an expected possibility of war. Had the media reported that, without celebration, then that’s news. However, the news reporters and the people interviewed, all celebrated that a man was intentionally killed, and only a 10 year old kid saw how that goes against everything we stand for and teach.