Earlier this week my oldest was so interested in a book being read in class that she brought it home, with the express purpose of reading it to us. I thought that was really interesting, and she did a pretty good job.

Later in the week I was walking through the grocery store with the kids when I grew frustrated with some of their behaviour. I thought about putting them back in line, then about how they might react to that. I really didn’t want to spoil the positive mood – I just wanted to curb their behaviours.

Somehow I came up with the idea of narration 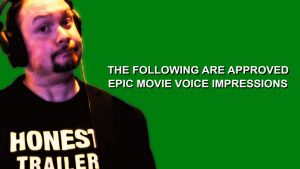 While one child was yanking on my arm, mysteriously performing some hair-swinging ritual, and the other was yapping away about something that I’d heard enough of, I broke out the “Movie-Guy voice” and said (something to the effect of), “Suddenly the children stopped and listened closely as their father changed his voice and started narrating their life, as they strolled through the grocery store.”

Both kids stopped in their tracks and focused closely on me. With a mix of surprise and entertainment, I had their full attention. I continued narrating each movement that we all made. They absolutely loved it.

I did it a few more times, including tonight, to get them back on track as well as to entertain all of us. It is fun for all of us, and if your kids are like mine they will ASK you to do it.

When my energetic oldest begged me to do it tonight I decided not to, just to see what she would do. After a minute or two of begging she realized that she wasn’t winning, with me staying silent, she began to do it herself! Awesome!

What I found really interesting about her doing it too is that she was narrating better than anything she had ever written for school. It would appear that I have accidentally stumbled upon a way to install creative writing software into her brain. I just have to make her aware of this new feature so that she can choose to use it when the time comes.

UPDATE: What a trip it is to read this in 2018! I remember that, but had forgotten about it at some point. Here’s how that unfolded over the long term, before it fell off my radar.

I think the kids really liked it because it was a story about them. It wrapped them up in the ‘me’ story. Soon after I started this they began to test my perceptive abilities by asking me to do it with that devious expression on their face –they thought I didn’t see it! I’d narrate a bit and then be called out for not being correct. Lesson learned there: don’t narrate their intentions, only their actions!

It was fun, and can still be fun, but you have to keep a few things in mind:

Again, if you try it, I’d love to hear about it. I am going to re-birth it now that they’re teens, lol. It won’t be the same!