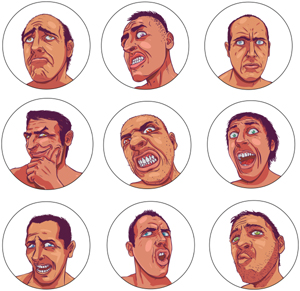 A big part of coping with life is having a flexible reaction to the ups and downs. Now, a study which will be published in an upcoming issue of Psychological Science, a journal of the Association for Psychological Science, finds that people choose to respond differently depending on how intense an emotion is. When confronted with high-intensity negative emotions, they tend to choose to turn their attention away, but with something lower-intensity, they tend to think it over and neutralize the feeling that way.

Emotions are useful—for example, fear tells your body to get ready to escape or fight in a dangerous situation. But emotions can also become problematic – for example, for people with depression who can’t stop thinking about negative thoughts, says Gal Sheppes of Stanford University, who cowrote the study with Stanford colleagues Gaurav Suri and James J. Gross, and Susanne Scheibe of the University of Groningen. “Luckily, our emotions can be adjusted in various ways,” he says.

Sheppes and his colleagues studied two main ways that people modulate their emotions; by distracting themselves or by reappraising the situation. For example, if you’re in the waiting room at the dentist, you might distract yourself from the upcoming unpleasantness by reading about celebrity breakups – “Maybe that’s why the magazines are there in the first place,” Sheppes says – or you might talk yourself through it: “I say, ok, I have to undergo this root canal, but it will make my health better, and it will pass, and I’ve done worse things, and I can remind myself that I’m ok.”

While many previous studies directly instructed people to employ different strategies and measured their consequences, the researchers wanted to know which regulation strategies people choose for themselves when confronted with negative situations of mild and strong intensity. In one experiment, participants chose how to regulate negative emotions induced by pictures that produce a low-intensity emotion and some that produce high-intensity emotion – a picture of a snake in the grass, for example, should give you low-intensity fear, while a picture of a snake attacking with an open mouth should be more intense. In another experiment, participants chose how to regulate their anxiety while anticipating unpredictable electric shocks, but they were told before each shock whether it would be of low intensity or more painful shock. Before the experiments, the participants were trained on the two strategies, distraction and reappraisal, and during the experiments, they talked about which strategy they were using at which time. 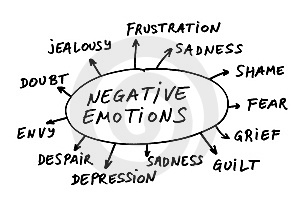 In both experiments, when the negative emotion was low-intensity, participants preferred to reappraise – think through it, telling themselves why it wasn’t so bad. But when high-intensity emotions arose, they preferred to distract themselves.

It’s helpful to understand which strategies healthy people choose to regulate their emotions in different contexts, Sheppes says, because it seems like people with depression and anxiety disorders might have those problems partially because it is hard for them to flexibly modulate their emotions to differing situational demands. “Maybe they need to learn when and when not to engage,” he says.